For over 40 years Herbert Bennett Williamson visited the Greater Grampians region on no less than 25 occasions1 almost exclusively during holiday leave from his teaching duties. Williamson’s journeys throughout this region were conducted predominantly on foot and bicycle, over hundreds of kilometres of scarcely signed landscape. It was not until the later 1920s that he would adopt the ‘luxury’ of a motorcar.

Until early in the twentieth century, much of the far Western district was botanically relatively unexplored terrain by white Australians.

The Field Naturalists' Club of Victoria

The majority of Williamson’s journeys were taken alone, however on occasion he was accompanied by members of the Field Naturalists’ Club of Victoria (FNCV). One particularly successful expedition was undertaken in October 1927. Members Mr. E.E. Pescott, F.L.S. (FNCV president), Mr. C. Daley, B.A., F.L.S., Mr. C.L. Barrett, C.M.Z.S. (editor of The Victorian Naturalist) and Mr. V.H. Miller were present for the ten-day tour, taking in the Southern and Northern ends of the Grampians, with a detour at Mount Arapiles.

During this trip, Williamson collected several rare and interesting specimens, with some of his finds reported in newspapers across Australia. Pescott remarked that Williamson’s extensive knowledge of Victorian flora and the Grampians terrain was invaluable to the Club’s collecting endeavours2.

Discoveries at the Grampians

This specimen — new to science at the time of its discovery — was discovered and collected by Williamson at Mt. Byron in the Black Ranges (part of the Grampians), in October 1927. The story of the discovery and collection of this species was told in The Herald newspaper in 1927.

This species was formally described by Williamson in a publication in the Proceedings of the Royal Society of Victoria in 1928. Pultenaea patellifolia, known by the common name Mt. Byron Bush-pea, is considered rare; it only grows in open-forest in the Black Ranges3.

I have the honour to send you with this a packet containing  specimen of a Grevillea, which I discovered in the Victorian Grampians in Oct 1893 and which the late Baron von Mueller described in The Victorian Naturalist for Dec 1899, naming it in my honour. 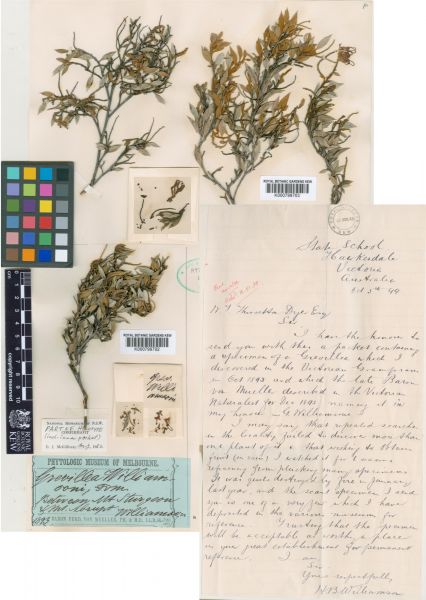 Williamson’s passion for surveying Victorian flora and sharing his finds with others included internationally renowned botanists and institutions. In addition to his considerable contributions to Australian herbaria, Williamson sent specimens found in the Grampians to Kew herbarium in London, as well as the Museum of Natural History in Washington D.C.

In total, Williamson formally described 60  plant species4 and for each of those species a type specimen (such as the one shown to the left), which represents the features and dimensions of that species is provided to a national or international herbarium for reference by other researchers.

Collection of the type specimen to describe the plant features often requires multiple visits, as Williamson notes in the letter accompanying this specimen, ‘wishing to obtain fruit (in vain) I watched it for 6 seasons refraining from plucking many specimens.’

Flora of  the Grampians

[a] Psilotum nudum (L.) P.Beauv.
Skeleton Forkfern
In Victoria considered vulnerable. Known to occur at Mt Arapiles and in the northern Grampians in the west and an isolated occurrence north of East Gippsland in the north east of the state (VicFlora, 2021).
© Jeff Jeans, RBGB 2021, CC BY-NC-SA 4.0.

2. Pescott EE. Excursion through the Western District of Victoria. The Victorian Naturalist. 1927;45:5–13.

5. Plants of the World Online [Internet]. Board of Trustees of the Royal Botanic Gardens Kew. 2021. Grevillea williamsonii F.Muell. [cited 2020 Nov 28]. Available from: http://www.plantsoftheworldonline.org/taxon/urn:lsid:ipni.org:names:704121-1